Skilled engineering and an astute use of concrete have given a seaside home at Bloubergstrand the protection it needs from stormy seas off the Cape’s Atlantic coastline.

After recent storms had weakened the wall between client Ernst Hartwig’s three‑storey house and the beach, it was considered necessary to rebuild the wall completely – to a new and more sustainable design. This was no simple task, considering the proximity of the property to the water’s edge, and the fact that it would have to be built in beach sand. With WSP Group Africa Consulting Engineers and CSV Construction tackling the project and AfriSam supplying the readymix, it was successfully completed earlier this year.

According to Alex Pospech, structural division director at CSV Construction, there was no time to lose on the project as the panels of the old wall had begun to tilt and allow sand and soil to wash out from the house-side of the seawall. If the wall was to topple, the ground under the house’s foundations would be undermined. 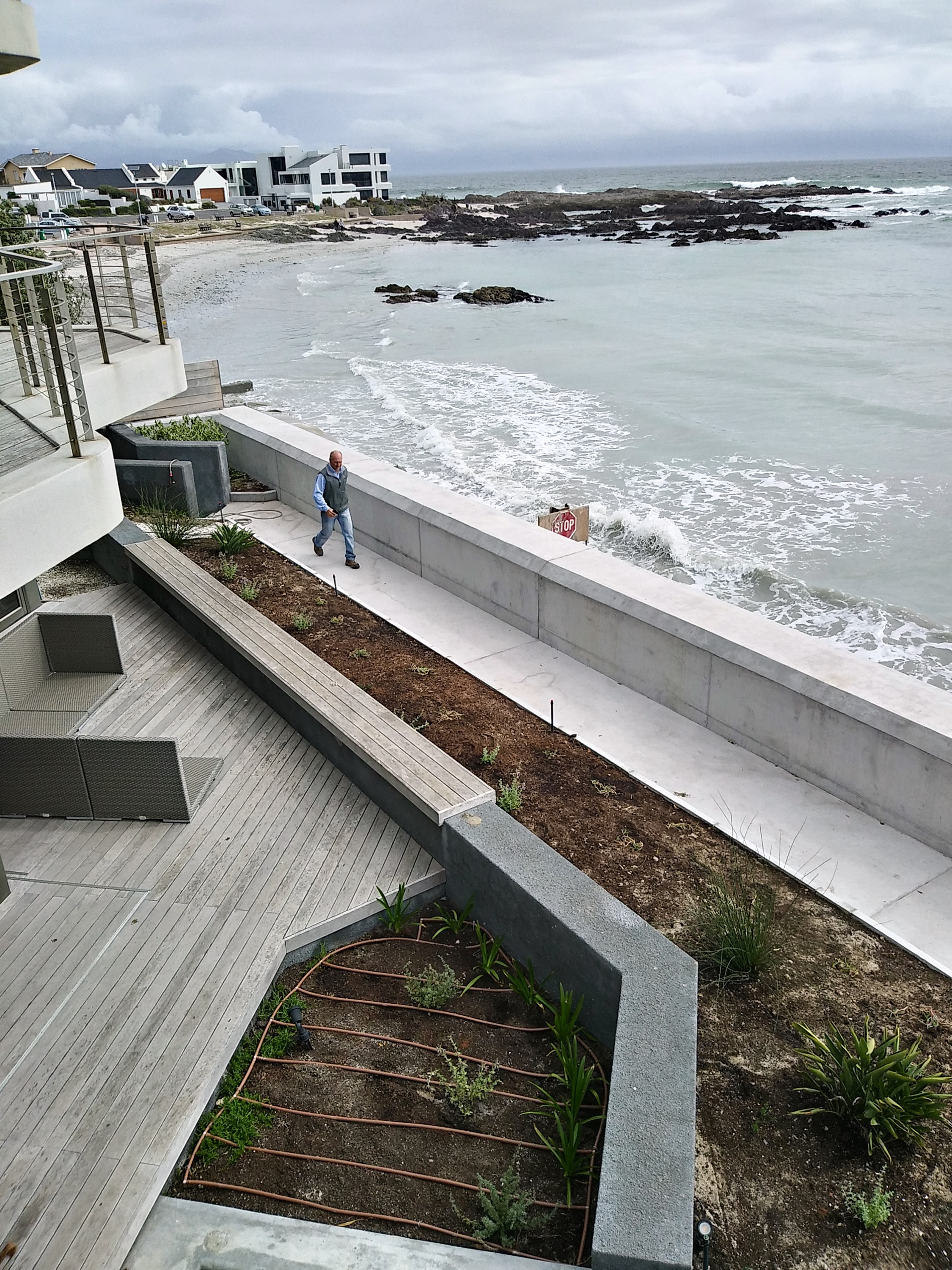 “The shore in front of the house was only accessible at low tides, while at all other times the works area was within the wave zone,” says Pospech. “This constrained our working time to generally only about three hours before low tide and three hours afterwards. It also created various technical challenges as there was no access for construction equipment to the property from the road.”

With the advice of civil engineer Francois de Roubaix of WSP Group Africa Consulting Engineers, it was decided to excavate to bedrock so that the new wall would have a more solid foundation. Jet probes ascertained that there was a rock layer at 1,5 metres below surface, which could provide the firm base for a mass concrete footing of about 2 metres wide.

“The challenge was therefore to design temporary works that would keep the sand and ocean out while we removed soil and beach sand from the client’s property to create the footing,” says De Roubaix.

The solution was a steel sheet piled coffer dam – a double row of Nippon Type 4 steel piles interlocking with each other – with piles driven to full refusal on the bedrock. While water and sand would have to be kept out, the sheet piled retaining walls would also have to be kept apart by dowels drilled and grouted into the rock at the base.

First driving the back row of the sheet piles provided support for the material under the house and protected against settlement; only then was the old wall toppled and the front row of sheet piles installed.

“The toppled walls also gave us a working platform for the excavators, and a bit more height which allowed us to work slightly longer before the rising tide ended our working day,” says Hannes Coetzee, civil infrastructure director at CSV Construction.

The piles were driven by a specialised high frequency piling hammer attached to an excavator, capable of exerting a 66 tonne downward force, while about 18 metres of horizontal distance could be accomplished in a day. Due to the undulating nature of the bedrock, water would still seep into the coffer dam. A grout curtain was installed to prevent this seepage of sand into the cofferdam.

Now the material needed to be excavated from the narrow two metre channel between the piles; to give access to an excavator and wheel loader, a heavy steel ramp was placed from the beach. So limited was the space that the excavator had to move back with its load before it could turn and dump into the bucket of a wheel loader, which also used the ramp to get close enough. Some 230 cubic metres of material was removed to create the void for the mass concrete footing. A higher water level was maintained within the cofferdam to equalise the pressure within the cofferdam and to prevent migration of sand into the cofferdam during excavation.

Tremie concrete requires the placement of a vertical pipe extending from above the surface to the underwater floor. As concrete flows from the bottom of the pipe, more is pushed through to ensure that the tremie pipe is continuously charged with fresh mix. This underwater feed method ensures that neither air nor water is entrapped or mixed in the concrete mass. As the mass expands with the concrete being pushed out of the pipe, only the outer layer is in contact with and affected by the salt water, leaving the rest of the concrete intact and in optimal condition.

“The readymix was supplied from our Peninsula Quarry about 17 km away, and the logistics had to be finetuned to ensure that delivery times exactly matched the low tides when pouring could take place,” says Melanie Ross, AfriSam’s territory manager for this contract. “This was not always easy, as the tide times could also fall when traffic was heavy so this required special attention to detail and timing.”

Placing of concrete for the footing had to be conducted in two pours of about 70 cubic metres each, due to the short time window provided by the low tide cycle. Dowel bars were then drilled into the foundation and shuttering prepared for the above surface section of the sea wall, which was completed in six 5,4 metre panel sections cast in‑situ.

With a base of 450 mm wide tapering to 350 mm, the visible wall is stylishly finished with a curved in‑situ coping along its top. Each of the six panels was completed in a single pour with 40 MPA readymix concrete from AfriSam. The formwork for the coping was specially designed and manufactured to complement the surrounding design; but the outward-facing curve also has a practical function – rolling back the storm waves that reach the wall’s height.

This sea wall solution has provided the client with a stylish barrier that matches the architectural impact of the home, while ensuring a solid and economical design that promises longevity for many decades to come.