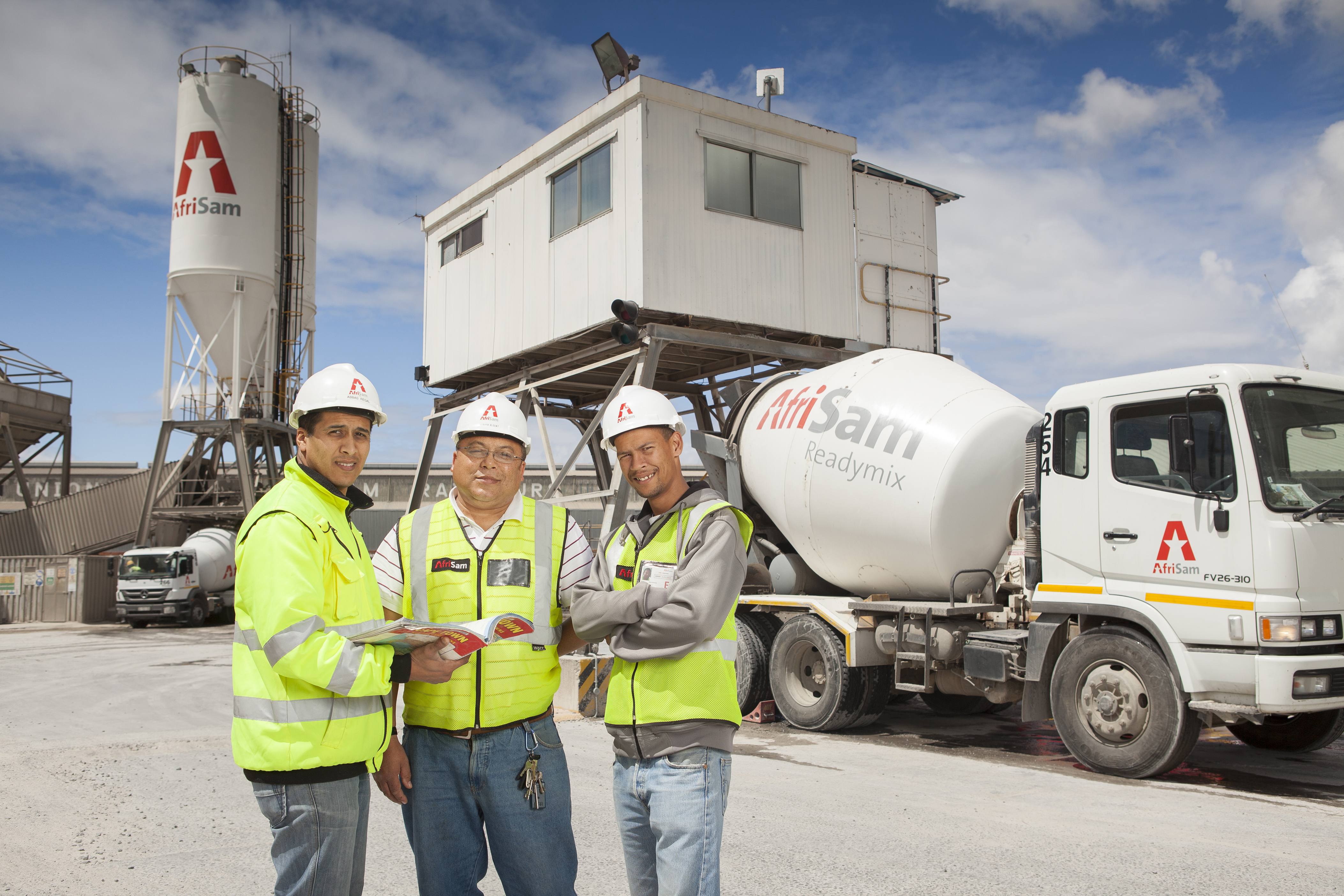 After years of trying to responsibly resolve the headache of readymix wastage and returns, AfriSam’s Jukskei Quarry in Midrand has made a breakthrough that will see this unsightly and potentially problematic material reused in its G5 sub-base product for road-building.

According to Mohamed Docrat, production superintendent at AfriSam’s Jukskei Quarry, it is “in the nature of the game” that unused concrete will be returned to their on-site readymix facility on those occasions when customers over-order or when there are other factors that prevent the customer from taking full delivery.

“We have had a readymix batching plant on our quarry site for many years, and have always faced the challenge of having to accommodate the returned concrete in a way that is safe and environmentally acceptable,” says Docrat. “The returned concrete comes in at any time of the day or night; it can’t be left in the mixers, of course, so it has to be dumped, even after hours when there is not as much supervision.”

He says that a number of solutions have been tried over the years – some more successful than others – including the filling of mined out areas, the creation of roadways and block making for separation barriers in the quarry.

“One of the issues is the inconsistency of the material being returned,” he says. “Applications employing formwork, such as block making, are often constructive, but when the concrete arrives back as a ‘slush’, it may not keep its shape in the formwork and this can create other problems.”

Solution
Many of these ideas worked quite well in terms of the purpose for which they were designed, but they all came with associated, and sometimes unpredictable, costs.

“Ideally we wanted a solution that could pay for itself by generating a revenue stream,” says Docrat. “So last year the management team put their heads together to come up with a way of generating a saleable product from the waste.”

The solution focused on the idea of adding the recycled concrete to the quarry’s G5 product, as this was a product category that was permitted to contain material from multiple sources (unlike products within the G1 classification, which were single-source only).

Indeed, the process of breaking up the returned concrete generates plenty of fines, says Docrat, which is beneficial to the product as the class specification for G5 demands that it must comprise about 80% fines.

It was decided that returned material would mainly be dumped in a specified area at Jukskei Quarry some distance away from the main quarry site.

“It was important to contain the returned concrete, because it can run when it is wet,” he says. “After enough drying time, we send in an excavator-mounted hydraulic hammer to break it up into sizes between about 250 mm and 400 mm. It is then loaded by excavator into a dump truck, which hauls it to a secondary stockpile.”

The blended material is then fed into a jaw crusher, after which the crushed material goes onto a production stockpile. Here, a loader operator again blends, or homogenises, the material before it is taken by dump truck to a set-back stockpile, where it is ready for sale.

“We add between 15% and 20% of recycled concrete into the G5, giving us a good mixture of decomposed material and returned concrete,” Docrat says. “During our G5 run to produce the material for sub-base layers in road making, we began testing by trickle-feeding a small portion of returned material into the G5, and found that it worked well.”

Quality
The first trial was on the Gauteng Freeway Improvement Project’s N1 extension, where AfriSam provided G5 for a few runs and the contractor gave it the thumbs-up; that was where the success of the idea really started to prove itself, according to Docrat.

As with all AfriSam products, quality control and rigourous testing is constantly required to ensure that it is fit-for-purpose. The material is sampled first from the production stockpile. Then, once it is in the set-back stockpile, it is fully tested for compliance with the final specification for G5 product.

“Customers also rely on the fact that all AfriSam products comply with the South African Bureau of Standards’ COLTO (Committee of Land Transport Officials) material grading specifications,” he says. “Our G5 product containing the recycled concrete has passed all the necessary quality hurdles under the SABS requirements.”

Paving the way
Another successful application for the returned concrete at AfriSam’s Jukskei Quarry has been the paving of many parts of the readymix site. A concerted effort is underway at the quarry’s readymix division, where a new plant is in place, to construct pedestrian walkways and to pave open areas. This is likely to consume a portion of the returned concrete.

“We have already been able to pave large areas of the readymix site,” he says. “This is possible when there is a return during the day, when there are people available to manage and supervise the pouring of returned concrete in the appropriate areas.”

This process begins with the preparation of areas to be paved, so that wet concrete can be poured into the waiting formwork and immediately leveled, with expansion joints left between the slabs. It is a well-organised process that ensures an attractive and functional end-result, he says.

Environment
Docrat highlights the importance of an environmentally friendly response to the issue of returned concrete, as there are no dumping facilities which accept this kind or quantity of waste. Recycling also means no slush around the plant, less potential for contamination, and a smaller carbon footprint.

“Our Environmental Management Programme requires that we achieve a certain level of recycling in our waste management strategies, and this breakthrough in recycling concrete is certainly a contribution to our performance in this regard,” he says.

The actual amount of concrete recycled each month is dependent on sales, which vary according to the economic climate and times of year. But he is confident that the amount of returned concrete that will be recycled into saleable AfriSam product could comprise up to 60% of the total concrete returned to the readymix site.

The recycling process, he says, will certainly make for a more sustainable environment; while at the same time make a contribution toward offsetting the costs that returned concrete place on the business.